It was a massive win for Doncaster on the last round of Shield, which ensures we will move into Premier division next year and fight for the Division 2 flag in two weeks’ time.

It was also a big win for the Men’s 40+ team, but the surprise of the round was the efforts of the three members of the Women’s 40+ team. They only went down by five points to Diamond Valley.

By including the points for the relays, David Firth was the athlete scoring the most points this week with 1492. Darryl Kilmartin scored 1274, Paul Mierisch 1224, Graham Ford 1205, Charmaine Smith 1157 and Will McCombie 1148.

Coming to the pointy end of the season there were numerous records, but the big one was Will McCombie’s 300 metres hurdles. Running for only the second time he knocked over three seconds of the record he set the week before, pushing Victorian record holder, David McConnell. He also broke his 200 metres record.

All athletes competing in the finals need to register online. Registrations will open on Wednesday at noon, as usual but invitation athletes will not be able to register until the following Monday, so no one should miss a spot in the field events.

The expectation is that the program will struggle to cope with the number of athletes, so if you can avoid it, don’t plan to go out on Saturday night and try to enter the earlier field events. 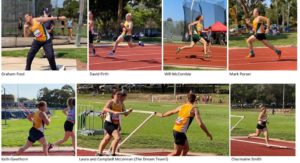